The aim of the Task 8.9 under WP 8 (Business models, replication of developed solutions, training and dissemination) is to conduct a behavioural campaign to promote energy efficiency and smart living behavior among the tenants in the Alabastern demonstration area in Växjö. Linnaeus University (LNU) led this task in close coordination with Växjö municipality and the housing company Växjöbostäder. At the first meeting of the task partners, Växjöbostäder suggested that household waste is a big problem in the Alabastern area and the behavioural campaign should focus on this aspect. Accordingly, the focus of task 8.9 is mainly on the behaviour regarding household waste management in the Alabastern area of Växjö city. However, the study includes some analysis of energy and water use based on data on monitoring and a questionnaire survey. 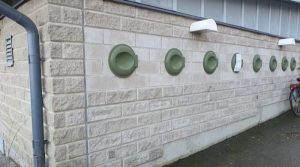 The Alabastern area is recognized as a socially challenged area, dominated by immigrants, mainly from some African and middle-eastern countries. It was a challenge, culturally and linguistically, to reach the tenants. After much effort, LNU recruited mediators in different phases of the project to interact with the tenants. They were trained varyingly, from several hours to one week, about the purpose of the project, benefits of waste recycling, and how to interact with the tenants. They conducted two focus group discussions, randomly interacted with people walking in the yard, visiting the recycling rooms, or gathered in nearby community hall, cafeteria and shops. They also visited each apartment to conduct a questionnaire survey and drive the information campaign. About 60-70 households participated in these activities.

The majority of these participating tenants reported that they are environmentally friendly, they take several actions to save energy and water, and they recycle household waste quite often. They mentioned that it was the “others”, who do not engage in proper waste recycling. According to them, the main reasons for improper waste recycling in the area include lack of information in other languages than Swedish and English, lack of knowledge about benefits of recycling, carelessness (attitude), no driving license or car to drive bulky waste to central recycling station of Växjö, insecurity among the ladies to enter the recycling room (that has no windows), children (sometime throw the garbage) do not have the key to the recycling room or cannot open the door as it is heavy, bad smell in the recycling room (lack of ventilation), people from nearby areas litter in Alabastern, and inadequate action by Växjöbostäder.

The participating tenants also suggested several solutions to the waste recycling problem. The information solutions include distribution of multilingual waste recycling brochures to every apartment, multilingual signboards in the recycling rooms, regular information meetings organized by Växjöbostäder on different topics (e.g. energy, water, safety, environment, waste etc.), and education of children and adults. Suggested Technical solutions include Surveillance cameras in and around recycling rooms, arrange containers for bulky waste 2-3 times a year, easy to open doors and windows in the recycling room, redesigned recycling room so that it is possible to throw garbage in separate bins from outside, different colour garbage bags for different fractions of waste.

Considering that lack of information was a major reason for improper recycling of waste, an information campaign was conducted. The waste recycling guide was translated to Somali and Arabic languages and distributed to each of the 313 apartments. The para-professional aides made door to door visit and discussed with 50 households. An information evening led by Växjöbostäder was also conducted. In the year 2019 Alabastern area generated about 363 kg colour glass, 228 kg clear glass, 299 kg plastic, 61 kg metal, 1307 kg cardboard, and 262 kg paper.