Airbnb – Too much of a good thing? How the innovative home-sharing service is disrupting cities and the travel industry

“People don’t buy what you do, they buy why you do it. […] The goal is to sell to people who believe what you believe,” theorised Simon Sinek, an American author, in one of TED’s most-viewed Talks ever. Sinek believes that the success of companies like Apple and leaders such as Martin Luther King, Jr. lies in effective communication about their vision of the world, rather than detailing facts on their computer’s features or unveiling a 10-measures programme. Under the management of Brian Chesky, a friend of Sinek, Airbnb appears to have followed this advice, as it constantly conveys philanthropic values in its communication. In early 2018, in an open letter to the Airbnb community, Chesky shared his dream about “Airbnb’s magical world,” in which you would be home anywhere. These marketing messages of self-praise so far seem to have worked well. Riding the wave of the trendy “sharing economy,” the once-fresh startup full of promises was valued at USD 38 billion by investors in May 2018. Building on a ground-breaking concept and a user-friendly online platform, the number of guests staying at Airbnb listings has been exploding since its creation in 2008, even doubling between 2015 and 2016. Airbnb has more listings today than the top three hotel chains combined.

Given this impressive success, the company couldn’t stay any longer under the protective shadow of Uber, once the only “terrible toddler”of the sharing economy. In the course of the last few years, policymakers in Amsterdam, Paris, New York and Berlin have implemented various measures to restrict Airbnb’s activities in their city centres. Their main issue with the platform is that it is making it much harder for residents to find affordable housing. These concerns are especially important at times when tenants in big cities spend a considerable portion of their income on rent (see Figure 1 below) and the benefits of mass tourism are being increasingly called into question. Are these grievances legitimate? 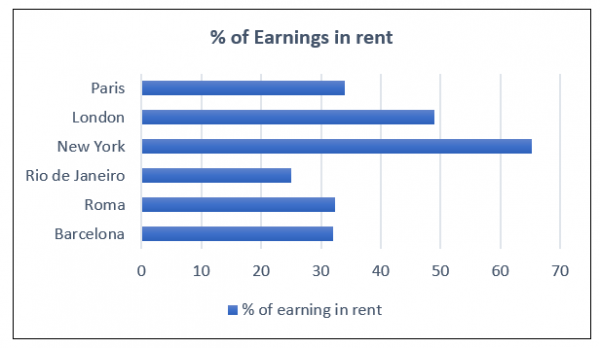 When the sharing economy comes at the cost of residents
Even if Airbnb is still young, an increasing number of studies have already documented the “Airbnb phenomenon.” The University of McGill recently published a study analysing the impact of Airbnb on the rental market in New York between September 2014 and August 2017. The study found that Airbnb has removed some 7,000 – 13,500 units of housing from New York City’s long-term rental market, and contributed to a USD 380 rent per year increase on average for New York’s tenants. Another study explains the process that led to this situation in more detail: “Airbnb takes supply out of the long-term rental market, which caters to residents looking to permanent homes, and reallocates it to the short-term rental market, which caters to tourists or other temporary visitors.” As the availability of long-term rental units decreases, their prices tend to be going up. For the landlord, this is an opportunity to earn more. According to the same McGill study, Airbnb’s New York hosts make an average of 55% more than they would from the median long-term rent. In some extreme cases, residents are being forced out – according to one study, 18% of the properties in central Florence are listed on Airbnb. As Airbnb’s platform makes it very simple to rent, homes automatically become more valuable, raising real estate values.

Ironically, the reallocation of long-term rental units to the short-term market contradicts the roots of the sharing economy. Indeed, its basic principle is to facilitate matching the demand and supply of various goods and services that are in excess capacity and might otherwise go unutilised. In the case of big cities, Airbnb enables sharing of a place between more “users” and for the landlords to make more money out of it; in the end, however, the utilisation rate of the apartment tends to decrease compared to a “normal” rent. It also puts those who are living in and shaping the city at a disadvantage.

Airbnb frequently insists on the idea that the platform enables middle-class owners to make ends meet. Nothing is more uncertain considering the unequal sharing of the pie: in 2017 in New York, 10% of Airbnb hosts generated 48% of all revenues.

Facing mounting opposition from citizens and policymakers, Airbnb focuses its communication strategy on the “sharing experience,” but its authenticity is a bit overrated.

Capitalising on the sharing, whatever it may cost
The company claims to “encourage social exchanges” and to make it possible “to visit cities as if you were living in them, not as a tourist.” While this may have been true in the beginning, much has changed. Taking some distance with the spirit of camaraderie of the early days, the company has made many efforts to make the experience look more like a hotel to attract new clients, especially for professional or well-off customers. Efficiency has now become the primary goal. Exchanges with the owner are increasingly limited or non-existent, especially when private companies take care of the logistics. Hosts and guests are respectively more concerned about the money and the affordability of their holidays rather than the cultural exchange. There is nothing wrong with this process in itself, but it has a little to do with community exchanges, authenticity and friendship that are touted by the company.

In New York’s case, many landlords maximise their profits by renting several rooms of the same apartment to different renters, without their own presence. This practice, however illegal, is widespread in the Big Apple, with 2/3 of Airbnb revenues between September 2014 and August 2017 coming from illegal listings. The platform even capitalises on available flats in illegal Israeli settlements.

The platform does not intend to stop there. Recently, it pushed capitalising on sharing even further by launching a service called “Experiences,” which are excursions or other activities (such as workshops, treks, etc.) designed and led by local hosts. Making a city tour with the guest was quite common in Airbnb’s early days, quite similar to Couch Surfing. It has now become a lucrative service. The platform monetises interactions, inviting hosts to use their friends and knowledge as ways to make money. Is the commodification of day-to-day activities still considered part of the sharing economy?

Airbnb is not the only one of its kind – there are many innovative platforms like it. Nor can Airbnb be considered intrinsically harmful, and banning it would be unwise. Airbnb is beneficial when it enables “owner occupiers” to rent their property when they are away on vacation. However, it becomes detrimental, especially in busy locations, when owners use the platform to rent to tourists rather than permanent residents. While the platform cannot be blamed for every flaw in urban areas, it is important to remember that Airbnb is just a company, far from a “community company” as its CEO claims. As with any company, the goal is to make a profit. However, in this situation, the end result is that many residents are pushed out of the city centre, unable to pay higher rent. Airbnb is an opportunity to reflect on a bigger question: tourism can be positive when it enables a city to generate more income for its residents, grow and prosper, but what happens when this comes at the expense of locals? Such innovations are needed for societies to change from the status quo, but they also need to be accompanied by regulations if they are to truly benefit the greater good of society. 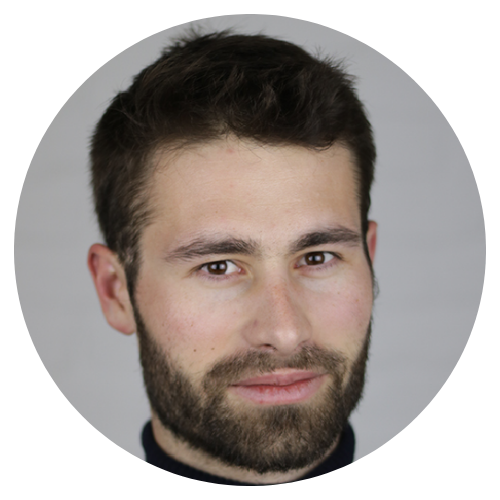